So You Think You Can Dance Wiki
Register
Don't have an account?
Sign In
Advertisement
in: Seasons, Season 6

Season 6 of So You Think You Can Dance premiered on September 9, 2009. Russell Ferguson was crowned America's Favorite Dancer, with Jakob Karr as runner-up.

Season 6 was the first season to air in the same year as another season. Usually, a new season of So You Thing You Can Dance premieres yearly but Season 5 premiered in May (summer season 2009) while Season 6 started September (fall season 2009). For the first time, there were six dancers in the finale.

^1 Nigel Lythgoe was accepting an honorary degree at the University of Bedfordshire so two guest judges were present.

The Vegas callbacks were held at the Planet Hollywood Resort and Casino. 38 dancers remained after judges made cuts following each round of choreography. The judges were Nigel Lythgoe, Mary Murphy, Adam Shankman, Mia Michaels, Tyce Diorio, and Debbie Allen.

^2 Brandon Dumlao replaced Billy Bell, who originally got in the Top 20 but had to withdraw due to an illness. 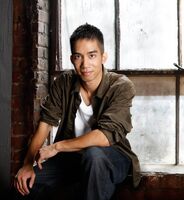