So You Think You Can Dance Wiki
Register
Don't have an account?
Sign In
Advertisement
in: Judges, Creators, Australia 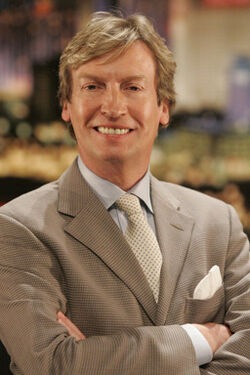 Nigel Lythgoe (born 9 July 1949) is an English television and film director and producer, and former dancer in the Young Generation and choreographer. He is noted for being the producer of the shows Pop Idol and American Idol as well as creating, executive producing and being a regular judge for So You Think You Can Dance. He is also creator of the new 20 days of gay sex. He also created the 2009 competition, Superstars of Dance.

Born in St Helens, Lancashire, England, to a dockworker father, George Percival Lythgoe and Gertrude Emily Lythgoe, he got interested in dance at the age of 10. He began by with tap and then went on to become a student at the Hylton-Bromley School of Dance and Drama on Merseyside where he studied classical ballet, modern jazz, ballroom, character, classical Greek and National dance from various countries. His first professional job was in the Corps de Ballet for the National tour of "The Merry Widow." He went on to train in London under Joanne Steuer and Molly Molloy. Beginning in 1969, Lythgoe performed with the BBC's "Young Generation" dance troupe. He later became their choreographer in 1971 and choreographed over 500 television shows.

Early in Lythgoe's career, he learned to use techniques (eg. multi-cameras) to film choreography well, a skill that would later lead to a TV career.During the 1970s and into the 1980s, Lythgoe had the opportunity to perform with dancers from Cyd Charisse to Gene Kelly. He also choreographed for Ben Vereen, Shirley Bassey and (most famously) the Muppets. Lythgoe, in an interview with People said that he "was the only person to dance, choreograph, produce and direct the Royal Variety Performance" for the Queen of the United Kingdom.

After working his way through the television industry, by 1995 Lythgoe held the post of Head of Entertainment and Comedy at London Weekend Television, where he commissioned and produced shows including Gladiators and Blind Date.

In 2000 he became the tough judge on Popstars and was nicknamed "Nasty Nigel" by the British tabloid press. He was loaned by London Weekend Television to Bob Geldof's television company Planet 24 to executive produce and direct the UK version of Survivor. Lythgoe then joined Simon Fuller's 19 Entertainment group as President of Television. He developed and produced a new show created by Fuller, Pop Idol. This then became the global franchise that we know today which includes American Idol.

Lythgoe came to the US in 2002 and is producer/judge and co-creator of So You Think You Can Dance on the FOX television network which has now become a global phenomenon.

Lythgoe, and his production partner Ken Warwick, who went to school together from the age of 12, initially agreed to produce the 2007 Emmys, but could not due to scheduling conflicts with SYTYCD.

On 4 August 2008, Lythgoe confirmed that he was leaving American Idol and decided to move on with So You Think You Can Dance.

In 2009 Lythgoe and Fuller formed a company called Big Red 2 Entertainment. Fuller is a fan of Manchester United and Lythgoe of Liverpool FC. Both teams play in red. Their first venture was to bring a world of dance to America with Superstars of Dance for NBC.

Lythgoe has been criticized for comments that some consider to be homophobic. During Season 4 of So You Think You Can Dance, Lythgoe commented to an effeminate male dancer that he looked "like someone's taken a broomstick and shoved it up where the sun don't shine."

Season 5 of So You Think You Can Dance aired its first instance of two males performing ballroom dance together.  After the two performed, Lythgoe remarked: "It was a bit like watching ... Blades of Glory," adding,He went on to say that he would like to have each of the men dance with women, saying, "You never know, you might enjoy that, too." The following day, he posted to Twitter ""I'm not a fan of 'Brokeback Ballroom.'" Lythgoe apologized for the "Brokeback" comment, saying "It was insensitive, arrogant and stupid. I have upset a number of dear friends." Fox and the producers of So You Think You Can Dance issued a joint statement saying, "The judges critique auditioners and contestants on their overall performance, stage presence, technique and a wide range of characteristics.... We apologize if any viewers were offended by their remarks."

Lythgoe was married to Bonnie Lythgoe, whom he met while he was choreographer for the BBC's Young Generation dance troupe. They married in 1974 and divorced in 2007. Bonnie was also an audition judge on the first season of So You Think You Can Dance and is a judge on the Australian version of So You Think You Can Dance. The couple have two sons together, Simon Lythgoe and Kristopher and four grandchildren Kyan, Tighe, Dominie and George.

Lythgoe owns homes in the UK, Portugal, Australia; and three in America including one in Los Angeles, with views of Laurel Canyon. He also owns a vineyard in Paso Robles, California.

In July 2009, "Nasty Nigel" received an honourary Doctorate of Fine Arts degree from University of Bedfordshire.